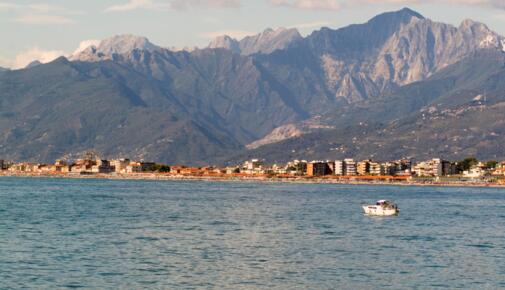 The Regional Park of the Apuan Alps

The Marble Mountains overlooking the Sea


Majestic peaks from which you can enjoy an incredible view of the sea , spectacular caves, green lakes and almost alpine landscapes: the Apuan Alps, which a few kilometers from the Versilia coast rise up to almost two thousand meters in height with Monte Pisanino, are a true spectacle of nature.

The Regional Park of the Apuan Alps protects this incredible natural environment: the mountains from which the famous Carrara marble is also extracted have a harsh morphology, with deep valleys and sloping slopes .
The park extends between Versilia, on the maritime side of the Apuane, the Garfagnana, the internal side, and Massa Carrara.

A wild and uncontaminated environment , where the limestone mountains guard, in the subsoil, phenomena of karst origin: in fact, 1300 caves are surveyed , among which the Antro del Corchia in Stazzema stands out , which is the deepest abyss in Italy, without forget the splendid Caves of the Wind in Vergemoli, both open to guided tours.

In addition to numerous botanical rarities - which can be admired in the Pietro Pellegrini Botanical Garden , a splendid alpine garden located in Pian della Fioba, in the municipality of Massa - here it is possible to observe the golden eagle and the coral chough and stroll through splendid woods and oaks, which alternate with the Mediterranean scrub.

Among the natural rarities we find Monte Forato, with its large natural arch - one of the largest in Italy - which unites the two peaks creating a hole visible both from Versilia and from Garfagnana : in some days of the year you can observe the sun rise passing through the arch from the villages of Volegno and Pruno, in the municipality of Stazzema.
Also spectacular are the Marmitte dei Giganti , deep cylindrical-shaped holes dug by streams over the centuries that can be admired coming down from Mount Sumbra.

The Apuan Alps are rich in water and artificial lakes , created to produce electricity that today have become a fascinating destination, such as Lake Vagli, under which lies the ghost town of Fabbriche di Carreggine which in 1946 was completely flooded to build the basin, but also the lake of Isola Santa, on whose banks there is a partially abandoned village.

BACK TO ALL ITINERARIES